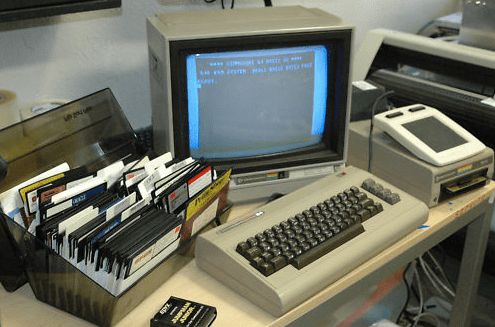 Who can forget that iconic greeting or the soothing but irritating dial up tones you heard when accessing your America OnLine account? For those old enough, the odds are that AOL was your first introduction to the wonders of the Internet.

AOL began in 1983 and went through a number of transitions before hitting it big by becoming America’s gateway to the Internet. I first used it with my Commodore 64. The Commodore 64 was an 8 bit system and took its name from the fact that it possessed a whopping 64 kilobytes of RAM. It was far from being blazingly fast but we didn’t care. Back then, we were amazed at the world it introduced us to.

This comes to mind because I had a woman in my studio yesterday with a dilemma. She had a box of old floppy disks that contained a bunch of .art files. These files could not be opened with any program known to her.

I was unable to help her recover the files that were on those floppy disks because the programs used to read those files are no longer in existence. I asked if perhaps she still had access to the computer which made the files or a backup of the original computer’s hard drive. But she did not. And unfortunately, no other program that I know of can open the files, uncompress them and render a readable image that can then be exported to a different format that can be accessed, stored or printed with today’s equipment.

I truly hate disappointing people. But it served as a rude reminder that technology is continually advancing and as it does, it makes our old technical standards obsolete and unsupported. We can and do work wonders with many of the old formats that were once popular decades ago. But as time continues to advance, our abilities to access older and more obscure formats will grow less and less. It is, unfortunately, the way of the world. If you have memories stored on devices or in files that you currently can’t access, you may want to think about getting them transferred soon before that option is taken away from you forever.

Michael Ondrasik and Home Video Studio specialize in the preservation of family memories through the digitalization of films, videotapes, audio recordings, photos, negatives, and slides. For more information, call 352-735-8550 or visit our website.