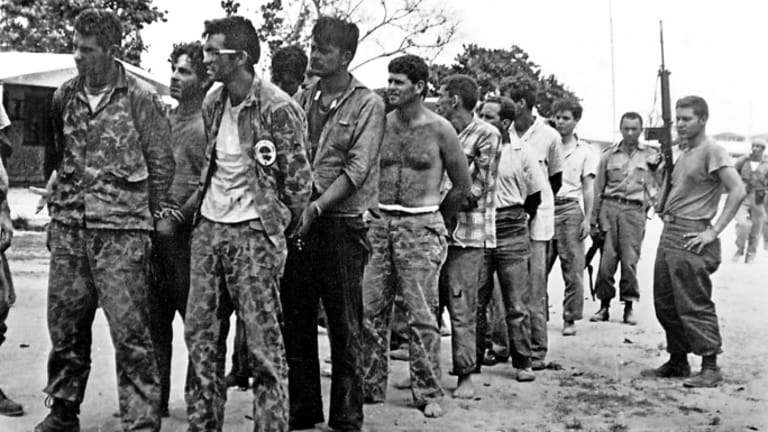 I am constantly amazed at how frequently history comes walking through our doors. Today a client brought us some films that were part of his dad’s collection. He then began to tell his story.

His dad was Paulino Caron, a Cuban musician turned dissident during the height of the Castro regime. He was an active participant in the disastrous Bay of Pigs “invasion” and as a result was captured and imprisoned by the Castro forces along with nearly 1200 other members of Brigade 2506. While in the prison camp, he was shot twice – once in the chest and once in the arm for being “uncooperative.”

What he was doing was trying to build morale among the other prisoners. He fashioned and led a prison camp band. They had no traditional instruments so they improvised. Broken bottles became horns, trash cans became drums. And they played music. It became so popular amongst the other prisoners they performed weekly shows. They took to calling it “The Ed Sullivan Show.”

After JFK finally arranged for their release in late 1962, the real Ed Sullivan, who had heard of their inspirational story, invited them to appear on his actual show with their makeshift instruments to play to his national audience. The video clip survives and can be found below. Paulino Caron is the one leading the band.

As the son was telling his father’s story, the pride in his voice and the glow in his eyes told me all – this was a story I needed to retell. I am thankful that he allowed me to do so.

Michael Ondrasik and Home Video Studio specialize in the preservation of family memories through the digitalization of films, videotapes, audio recordings, photos, negatives, and slides. For more information, call 352-735-8550 or visit our website.