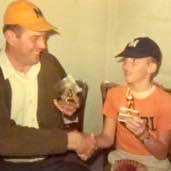 I was transferring a videotape yesterday that contained some footage of a Little League Baseball game. Boy did that take me back. I was quite the little star as I was coming through the ranks of baseball.

My father, who was a professional athlete, took great interest in my sports activities but did not want to show any kind of favoritism so he supported the league by volunteering to be a coach on the one condition that I would not allowed to be on his team. I never did understand that logic but eventually learned to appreciate the depth of his integrity that drove him to think it was important. So, for a season, I was on a team that would play against a team coached by my father.

That spurred an incredible level of competition in our household that season. I just wanted to beat his team so badly I could taste it. And our two teams were pretty evenly matched. Their team was better coached; we had the better players. We were neck and neck all year and it finally came down to the last game of the season… which my dad’s team won.

I was so disappointed. But there was a saving grace. I was chosen to be on the All-Star team which in a post-season game would play the first place team of that season… my dad’s team.

It was a rout. We won 18-2 and I drove in 12 of those runs with an incredible batting performance.

I so wanted to gloat on the ride home but I just couldn’t bring myself to do it because I could see how proud my dad was of me. It was a weird season, never to be repeated. The next year I graduated to the next age level where I quickly learned I could not see, let alone hit, a fast ball. I gave up the game soon after.  But I will always have that one season and that one game to remember.  Thank you Dad. Thanks for the memory.

Michael Ondrasik and Home Video Studio of Mount Dora specialize in the preservation of family memories through the digitalization of film, videotapes, audio tapes, photos and slides. For more information, call 352-735-8550 or visit www.homevideostudio.com/mtd.