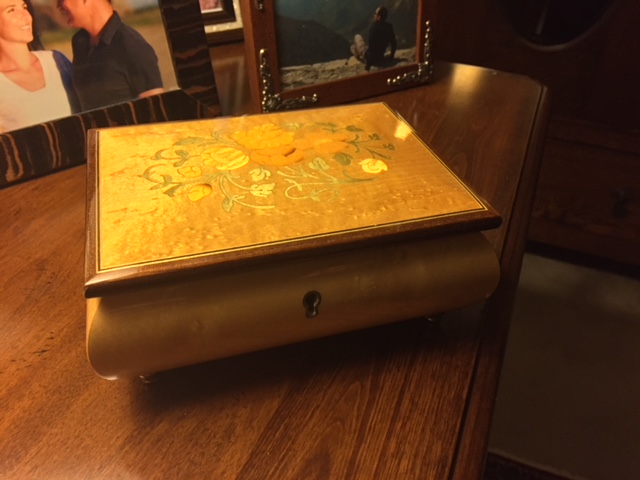 I had a client in my office yesterday who presented me with an audio cassette containing his father showcasing one of his passions of life. He collected music boxes. The audio cassette had him playing each music box one by one and afterwards he would explain how he acquired it and what it meant to him. His son said that by the end of his life he had acquired a collection of more than 200 music boxes of all kinds.

It brought to my mind the very first gift I bought for the woman who eventually agreed to become my wife. It was a musical jewelry box.  I bought the box because, at the time, I couldn’t afford the jewelry. I figured it would count as a promissory note.

By this time I had learned enough about her to know that her favorite piece of music was Rachmaninoff’s Variation on a Theme by Paganini. What I didn’t know is that it wasn’t a commonly used piece of music for a music box.  I could have easily gotten her the theme to Love Story, or Mozart’s Eine Klein Nachtmusik which could be found in abundance but instead I spent weeks looking for the Rachmaninoff piece because she loved it so. (This was before online ordering took all the challenge out of shopping.)

I finally found one in a discount store, bought it, put a small trinket in it (because even then I knew you couldn’t give someone an empty jewelry box), and wrapped it up.  I guess she liked it. After all she married me. And the box is still sitting on her nightstand some 26 years later.

Michael Ondrasik and Home Video Studio specialize in the preservation of family memories. For more information, call 352-735-8550 or visit www.homevideostudio.com/mtd.