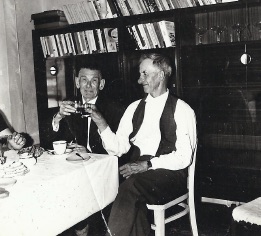 I remember my grandfather, who emigrated here from Slovakia in the early 1900s, trying to tell his grandchildren a story. He never did learn the English language all that well. Still, he delighted in teaching us teens how to order a beer in his language.

As he tried to communicate with us, we gleaned that at some point in his early life he was a stable boy responsible for the Lippizaner Stallions who had been brought to his area prior to WWI. The story, as he told it, became more and more intriguing. Maybe it was because our imagination had to fill in the gaps caused by his limited English.

He’s gone now. And so is his story. And what a missed opportunity because we never thought to record him telling it.

We like to say that everyone has a story. And everyone’s story deserves to be heard… especially by the generations to come. Today’s technology makes that available. We should all consider putting our stories on tape (video or audio) so we might pass our perspectives, wisdom, and life experiences onto our progeny. The most precious legacy we leave behind are the memories we’ve collected along the way.